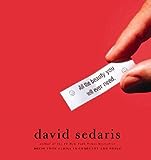 When You Are Engulfed in Flames

This book is in a Controlled Release!

Journal Entry 1 by msjoanna from Columbia, Missouri USA on Friday, February 12, 2010
The box actually has this image:

This is read by the author, unabridged, on 8 CDs. A few of the recordings are recordings of live readings, which are even better than the studio recordings because Sedaris is really playing to a listening audience.

From Publishers Weekly
Starred Review. Sedaris's sparkling essays always shimmer more brightly when read aloud by the author. And his expert timing, mimicry and droll asides are never more polished than during live performances in front of an audience. Happily, four of the 22 pieces are live recordings, and listeners can hear Sedaris's energy increase from the roaring, rolling laughter of the appreciative audience. Sedaris's studio recording of his 10-page Of Mice and Men runs 16 minutes, while the live recording of Town and Country, which runs the same length in print, expands to 22 minutes thanks to an audience that often doesn't let him finish a sentence without making him pause for laughter to subside. The studio recordings usually begin with an acoustic bass and brief sound effect (a buzzing fly, the lighting of a cigarette, the clinking of ice in a drink, etc.). Sedaris's brilliant magnum opus, The Smoking Section (about his successful trip to Tokyo is quit smoking) stretches across the final two CDs.

Journal Entry 2 by msjoanna from Columbia, Missouri USA on Wednesday, February 17, 2010
It's always great to listen to Sedaris read his own essays; even better to listen to him read aloud to a live audience. Luckily, the audiobook has him reading and includes four recordings of live readings. These essays are Sedaris as he becomes more comfortable in his life and his writing, which improves some of the timing, but gives him less funny material. Ultimately, his current reasonably leisurely life in France is only moderately entertaining; his journey to quit smoking by moving to Tokyo and quitting cold turkey nice, but not that compelling.

I still enjoy his honesty and willingness to admit to feelings that aren't admirable and his own wonder that he's become as successful and famous as he has. He still has some of that touching vulnerability to him that made him so interesting in the first place. I don't think I'd read this book in print, but it's a good choice for an audiobook.

On its way to KathyB...enjoy!

Journal Entry 4 by KathyB25 from Arlington, Texas USA on Tuesday, February 23, 2010
received today from MsJoanna - thanks so much!

Requested by someone on PaperBackSwap

"Substitute damn every time you're inclined to write very; your editor will delete it and the writing will be just as it should be."