cunt: a declaration of independence

More Tales of the City

The Picture of Dorian Gray

The World According to Garp 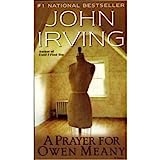 A Prayer for Owen Meany

The Gunslinger (The Dark Tower, Book 1)

My Favourite Books for 2006:
Fiction
Something Rotten by Jasper Fforde
Harry Potter and the Half Blood Prince by J K Rowling
The Other Boleyn Girl by Phillipa Gregory
The Girl in Times Square by Paullina Simons
Ender's Shadow by Orson Scott Card
The Kite Runner by Khaled Hosseini
My Sister's Keeper by Jodi Picoult
We Need to Talk About Kevin by Lionel Shriver
Eragon by Christopher Paolini
Eldest by Christopher Paolini
The Amulet of Samarkand by Jonathan Stroud
Shadow Puppets by Orson Scott Card
Golem's Eye by Jonathan Stroud
Ptolemy's Gate by Jonathan Stroud
Non Fiction
Wild Swans by Jung Chang
Geisha of Gion by Mineko Iwasaki
The Two of Us by Sheila Hancock
Dude Where's My Country by Michael Moore
Yes Man by Danny Wallace

My Favourite Books for 2005:
Fiction
Harry Potter Books 1-5
Gone with the Wind
Ender's Game
Shadow of the Hegemon
Speaker for the Dead
One for the Money
Ten Big Ones
The Matarese Countdown
Non Fiction
Tuesdays with Morrie
Join Me
Not on the Label (a must read book)
Round Ireland with a Fridge

Bookrays I am running:
The Devil Wears Prada by Lauren Weisberger STILL OPEN (with silverstarry)
Silverstarry has taken over half of the bookray. Here is the link to silverstarry's ray
Fast Food Nation by Eric Schlosser NOW CLOSED

"A good book makes you want to live in the story. A great book gives you no choice"