by Newk | |
ISBN: Global Overview for this book
Registered by newk of Adelaide, South Australia Australia on 5/27/2005

12 journalers for this copy...

Journal Entry 1 by newk from Adelaide, South Australia Australia on Friday, May 27, 2005
My first Australian convention in Sydney last year was marked by, amongst many other things, the birth of Skyring's Convention Journal.

Non-competitive Newk has been searching his brain for an idea to rival that of his mate Skyring. Something to have a bit of fun with.

ALSO in Sydney there was a name on everyone's lips....."where is Grooble?" and "I wish Grooble was here".

Combine the two thoughts and you have (drum roll please)

Here is the opportunity to put into print/photograph/journal entry form the thoughts of this year's conventioneers.

Maybe, just maybe, the shirt can travel and perform at other meetings.

I have in mind some sort of prize for the bxer most missed.

Indeed I have enlisted an anonymous sponsor who has offered to pay (australian) capital city to capital city air fares to the next Australian convention to the winner of the I wish competition.

RULE A1: basically what newk says goes BUT also:

1) all entries to be made by journal entry for this BCID, which is on the T shirt.

2) all entries must have a photograph of the nominator wearing the T shirt with the name of the nominee clearly visible. See example photograph below.

4) you can vote for as many bxers as you like but only one at a time.

etc, etc. I will make up rules as necessary to be fair. 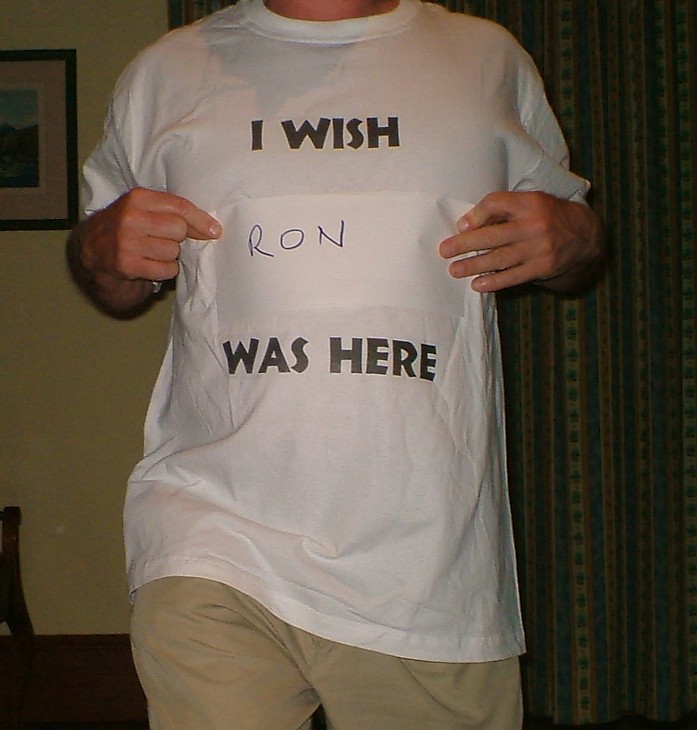 OK OK the writing needs to be bigger but you get the picture.


please note newk is currently having a T shirt phase so be prepared to be photographed in more than one!

Journal Entry 3 by puppymummy from Melbourne CBD, Victoria Australia on Sunday, June 26, 2005
I spent some time discussing the proper rules of etiquette for this t-shirt - please note that my vote was cast in a very secret ballot, and I voted once only. I feel that a vote for more than one person should ensue in the vote's worth being split - if I was running the competition, there would be none of this sluttish behaviour!
The recipient of my vote will have to remain unknown until I get home and convince Keith to upload the picture!

I caught this t-shirt on Friday night at registration. I was not the first nor the last to enjoy its embrace. Sluttish indeed, Puppymummy.

To comply with competition rules, I did have my photograph taken, but will have to wait for Futurecat to give me the image before uploading it and revealing who got my vote. Watch this space, I'll come back and edit it.

Later ... Futurecat gave me the photo, so here it is! I voted for Boreal because she's been lovely - though I'm not sure if the prize will cover a trip over the Tasman.

I'm being remotely prodded at the moment to post my journal entry. While I accept that my little journal might have prodded Newk into action, I stress that it's only famous because of everyone OTHER than me. It'd only have one entry from me if it hadn't been enthusuastically embraced by all the other Merry BookCrossers.

Most of the convention attendees turned up with one arm longer than the other from lugging bags of books around. Newk was the only one who brought more clothing than books. He changed his shirt - no, I'm not making this up - two dozen times on the first night. To a different one each time. I got to wear one or two of them as well. ShirtCrossing.

Anyway, here's a picture of me, the shirt, and the person I most missed.

No, wait. That's not me! I have a wedding ring on my left hand. Not sure who it is.

I'm waiting for whoever took a picture of me to stand up and send me a copy.

Me, I voted for Littlemave.

I completely ignored the rules (a true FuSHie always does) and have voted for my two favourite expat BookCrossers Hawkette and Kuju. They can't win the competition but I wished they were there to share in the fun in Brisvegas. They would have enjoyed learning the international gesture for BXer and maybe we would have won the trivia with them on our team (*g* it's all about winning right!).

Well I may as well just write everything that fushmush did, since we were roomies on the weekend we spent a lot of time together and obviously weren't allowed to have individual thoughts. :)

I too voted for Hawkette and Kuju even though they're on the other side of the world, maybe they'll make it back for next years convention...

Ok, so I know TopKat isn't eligible to win the prize, not being an Australian, but she is the person I most wish could have made it to Brisbane!

We were allowed to vote more than once, right? Who cares, I'm going to anyway!

How can you have an Australian Bookcrossing Convention without Australia's most prolific Bookcrosser?

I don't know why, but something kept telling me all weekend that I should vote [1] Littlemave... maybe it was the promise of chocolate ;-)

I did miss Littlemave though - it just doesn't seem like an antipodean convention without her!

I promise this is my last vote. And I'd like to point out that:
(a) I DO NOT WANT MY BOTTOM GROPED IF LIBERTINE101 WINS!!!!
(b) The fact that I had to photoshop this picture to get her name in is absolutely no reflection of the fact that I kind of forgot to get a genuine photo taken of me voting for her.

Right, now that that's cleared up...

Thanks to all those who have contributed to the fun. MMMMM photoshopping entries. MMMM Ok only for futurecat! :) Happy birthday for last week by the way.

Entries are a bit slow. Oh well. Maybe I can understand why. I am slowly sorting all my photographs and putting them to journal entries. Will take another week or two I think. I know that heaps more photographs of wishers were taken.
Here is my first real effort. Ron obviously cannot make it.

Journal Entry 14 by newk from Adelaide, South Australia Australia on Sunday, July 3, 2005
And I DO want my bottom groped if libertine wins

Pete, wondering if a bottomgroper is maybe some sort of creature you might find in an aquarium

Met the T-shirt at the Brisbane convention and a great time was had by both of us.

This is on behalf of Steelman

Journal Entry 18 by wombles from Caboolture, Queensland Australia on Monday, July 4, 2005
I have a photo of me wearing this shirt with I wish skinglist was here written on it, but buggered if i can get it small enough to put it in here,...grrrr!

I thought I was at the Bookcrossing convention, ... or maybe even the fruit and vegie convention.. but in fact I must have been at the T-shirt convention! Here I am fashionably attired in the latest model - comes in all sizes and colours as long as it's XL and white.

Journal Entry 20 by newk from Adelaide, South Australia Australia on Thursday, July 21, 2005
Thanks MeganH. How did the poverty pack go?

I know there were a few more intrepid bxers who ran away with this shirt and a camera. I better follow em up....puppymummy where are you?

from Preston, Victoria Australia on Thursday, July 21, 2005
"I wish" for future reference : all Poverty packs supplied for Passion Palace stayers - the addition of a nice thick towel, a pillow and earmuffs ..and also plumbing supplies for cleaning hair out of shower drains.
"I wish" for this one-time (only!)resident of the Passion Palace :- Five star accommodation in Dundedin, Adelaide, Canberra and any future conventions.
"I wish" the T-shirt hadn't been worn by so many BXers or it might have been stolen for use as a towel.

Journal Entry 22 by charbono from Creswick, Victoria Australia on Sunday, July 24, 2005
Well well. I voted for grooble, Mundoo and aussie-rose. BUT as all three live in S.A., and Adelaide will be hosting the 2006 Convention, there seems little point to posting the pics on here now! Yay, all 3 of my wishes will be granted :) Perhaps for future "I Wish" competitions there could be a rule that you're not allowed to vote for more than 1 BCer from each state? Thanks again to the wonderful anon donor, you rock!

OK, redguard has helped and I believe I can now cast my vote. And the recipient is...... (drumroll)

Well, almost 6 months late to get around to submitting my vote.

I wore the t-shirt for to vote for grooble, libertine101, and littlemave. Since the conference is being held in Adelaide, grooble doesn't need to fly in.
And litlemave's bribes and coercions have already garnered many votes (besides, the photo was unreadable).

Journal Entry 25 by newk from Adelaide, South Australia Australia on Wednesday, December 7, 2005
I knew there was more to come!

Journal Entry 26 by newk from Adelaide, South Australia Australia on Thursday, March 16, 2006
The winner has been chosen and will not surprise some!
She is booked to come to Adelaide for the convention and it will be her first Australian convention. I reckon that she will liven things up a bit!

"Every journalist has a novel in him, which is an excellent place for it."