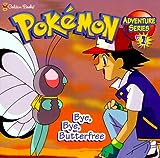 Journal Entry 1 by AceGirl from Richmond, Missouri USA on Saturday, April 17, 2004
Summary
Ash, Misty, Pikachu and Brock became famous with the Pokemon Rage that began in the mid to late 90's and seeped into the new millenium. Ash is a Pokemon trainer. Pokemon are fantasy creatures with fantastic powers that live free and unharmed in Ash's universe. But because some trainers try to steal the power of Pokemon, Ash and his friends do all they can to learn about protect and discover new Pokemon before their adversaries (Team Rocket) do.

This book (#1 in the series) tells about the groups adventure with one of their trained Pokemon, Butterfree. Butterfree are large butterflies that are able to do pollen, flying and whirlwind attacks. None of these attacks were enough to stop Team Rocket however from capturing many Butterfree in a net during mating season.

It is up to Pikachu, the little lightning animal, to save the day. Riding on Butterfree's back, Pikachu surprises Team Rocket with an electric shock.

At the end, Ash realizes that Butterfree is much happier in the wild than with his trainer so Ash agrees to set him free.

Critique
Though I love the animation and illustrations of Pokemon almost as much as I like the plot line and imiginative characters, this particular book didn't do the Pokemon franchise much justice. It is obvious it was written specifically for promotion of the show. Pages are splashed with colorful attractive illustrations and scenes are taken straight from the animated television series. However character development, literary devices and aesthetic appeal have been sacrificed.

Though the author uses dialogue, it is shallow and sing-songy dialogue. (I think Team Rocket's war cry is cute though!) The characters are shallow because they arent well developed through dialogue and in order to keep the story short and simple characters are basically flat. The only personality readers can attribute to the characters must come from the show or the illustrations. All the characters are beautifully illustrated. My favorite illustrations are with Team Rocket. Jessie and James have the coolest outfits and even cooler looks. But they do have to stand out to be bad, so its understandable.

Activities
Pokemon Hunter Encourage kids to bring in anything that has Pokemon or reference to Pokemon on it. Discuss how the story and characters and show have been popularized by creative marketing strategies. Ask students whether Pokemon serve as good spokespersons for the products and services they appear on.

Pokemon Breeder Pokemon provide the perfect opportunity to use adjectives. Several approaches can be made. Invite students to randomly and secretly select Pokemon to describe in speaking or writing. Or be a little more daring and encourage them to invent a new breed of Pokemon. Allow students the time to share their Pokemon, and even trade them.


Pokemon Tournament Invite students to actually play the cardgame version of Pokemon. Because the game requires small group communication, strategic planning, and critical thinking, it makes for a fun filler activity and allows students to participate in a way they are interested in.

A Dairy Queen/Mobile Gas Station Combo was the perfect place to release this book. Luckily I released it just days before the showing of the butterflies in Madison. I hope a child finds it and enjoys it.

"I love to lose myself in other people's minds. Books think for me."