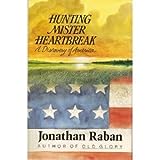 by Jonathan Raban | Travel | This book has not been rated.
ISBN: 0060182091 Global Overview for this book
Registered by Semioticghost of Ipswich, Suffolk United Kingdom on 7/12/2013

"In an era of jet tourism, [Jonathan Raban] remains a
traveler-adventurer in the tradition of . . . Robert Louis Stevenson."
--The New York Times Book Review

In 1782 an immigrant with the high-toned name J. Hector St. John de Crèvecoeur--"Heartbreak" in English--wrote a pioneering account of one European's transformation into an American. Some two hundred years later Jonathan Raban, winner of the National Book Critics Circle Award, arrived in Crèvecoeur's wake to see how America has paid off for succeeding generations of newcomers. The result is an exhilarating, often deliciously funny book that is at once a travelogue, a social history, and a love letter to the United States.
In the course of Hunting Mr. Heartbreak, Raban passes for homeless in New York and tries to pass for a good ol' boy in Alabama (which entails "renting" an elderly black lab). He sees the Protestant work ethic perfected by Korean immigrants in Seattle--one of whom celebrates her new home as "So big! So green! So wide-wide-wide!"--and repudiated by the lowlife of Key West. And on every page of this peerlessly observant work, Raban makes us experience America with wonder, humor, and an unblinking eye for its contradictions.

"Raban delivers himself of some of the most memorable prose ever written
about urban America." --Henry Kisor, Chicago Sun-Times

"When Raban describes America and Americans, he is unfailingly witty
and entertaining." --Salman Rushdie

This book is to be left on the shelves upstairs in Coffee Link.

If you are the finder, you can make a journal entry here - you can remain anonymous if you want! I hope you enjoy the book and that you'll get a chance to leave it somewhere else for someone else to find in due course.

Local bookcrossers meet on the second Saturday of each month from 12-1.30 upstairs in Coffee Link on Neptune Marina to share books and conversation. New members are always welcome and you don't need to bring anything! Be warned though - it's quite normal to leave with more books to read :)

Journal Entry 3 by KenseyRiver at Brightlingsea, Essex United Kingdom on Saturday, July 13, 2013
Pushed on me by SGhost.

Left on a bench outside the Market Dome.

"The best time for planning a book is when you're doing the dishes."